New Guidelines to Address Opioid Use in Workers’ Compensation Claims

The Commonwealth of Pennsylvania recently issued prescribing guidelines for the use of opioids in workers’ compensation claims, as well as guidelines for pediatric patients, and particular types of medical providers, such as dentists. As has been extensively publicized recently, the widespread use of opioids for the treatment of pain has resulted in an epidemic of addiction and overdose deaths. Many medical providers began prescribing opioid treatment for relatively minor injuries starting in the 1990’s following assurances by pharmaceutical companies that the use of opioid medications were an appropriate and non-addicting approach to treating acute and chronic pain. In the next two decades, it became clear that opioids often resulted in dependency even when prescribed for a relatively short period of time, and studies undertaken since that time, show that long term use of opioids generally exacerbate, rather than help control, long term chronic pain. In recent years there have been some well publicized arrests and convictions of physicians who operated “pill mills”, which provided opioid prescriptions for money or favors without a medical examination or knowledge of a patient’s history. The escalating costs arising from opioid prescriptions in both financial and human capital in the workers’ compensation arena, clearly required some action to address the dire situation.

When releasing the new prescribing guidelines for workers’ compensation, Governor Tom Wolf noted that, “ In 2017, there were 174,216 workers’ compensation claims made in Pennsylvania, and our state ranks third highest in the nation in the percentage of injured workers who become long-term opioid users.” The Guidelines cite studies from the Worker’s Compensation Research Institute showing that, in Pennsylvania, the percentage of injured workers who become long-term users of opioids is among the highest in the nation. The studies also show that workers who received long term prescriptions of opioids for work-related lower back injuries had a 900% greater amount of lost time from work than those who were not treated with opioids. The PA Department of Health who formulated the guidelines through a task force of medical and pharmaceutical professionals, noted that the workers’ compensation prescribing guidelines were intended to supplement, not replace clinical judgment of responsible medical providers, however, the guidelines do set forth specific considerations as to when, and how long, opioid medications should be prescribed to treat acute, subacute, post-operative, and chronic pain. The guidelines also make it clear that they are not meant to apply for treatment of pain associated with cancer, sickle cell disease, or the treatment of terminal conditions associated with occupational illness or injury.

The guidelines indicate that for an acute injury, which are generally self-limiting nature (such as sprains/strains/contusions), pain should be managed with non-opioid medications such as acetaminophen or non-steroidal anti-inflammatory drugs (NSAIDs). When symptoms related to a sprain or strain are more severe, a muscle relaxants such as cyclobenzaprine, baclofen and tizanidine may be appropriately added to the treatment regime. The guidelines indicate however, that prescriptions for muscle relaxants should limited to one week, and only prescribed further once the medical provider has reassessed the injured worker. The guidelines also state that the use of muscle relaxants should be limited to two weeks as they provide no medical benefit after that timeframe. The guidelines also indicate that other non-opioid treatment options such as gabapentin, pregabalin, and duloxetine can be appropriate in some cases for relief of acute pain. In addition, short-term rest, ice, elevation, physical therapy, exercise, chiropractic treatment, and cognitive-behavioral therapy may be prescribed.

When a provider determines that opioids are appropriate to treat severe acute pain, the lowest effective dose should be used for the shortest duration possible. The guidelines suggest that any initial prescription of opioids be limited to a seven day supply and patients should be screened for substance use disorder, especially opioid use disorder. And only after consulting the Prescription Drug Monitoring Program (PDMP) set up by the Commonwealth, designed to ascertain the patient’s history of controlled medication use/abuse. Where there is treatment of an injured worker in an emergency department, the guidelines indicate that opioids should only be prescribed if clearly indicated and for no more than 3 days.

In regard to opioid prescriptions for chronic pain for work related injuries, recent studies, as noted above, suggest that outcomes are actually worsened by the use of opioids, in that high doses of opioids can cause opioid-induced hyperalgesia, or an increased sensitivity or response to pain, causing patient to have greater pain than they would without the use of opioids. Per the Guidelines, chronic opioid treatment should be by careful plan, weighing the efficaciousness of the treatment against the risk of harm, rather than by continuing opioid therapy merely due to an acquired addiction. Before treatment of chronic pain with opioids, the guidelines indicate that a comprehensive patient history should be taken, a physical examination performed, a diagnosis rendered, and a treatment plan formulated. The guidelines also suggest that before opioids are prescribed for chronic use, patients should be counseled on the potential for addition and the risks associated with opioid use, a urine drug screen should be obtained and reviewed to ascertain what medications and/or illicit drugs are being used, a thorough assessment should be done to determine if there are any psychiatric disorders, including depression, anxiety, or sleep disorders, and in particular, past and current substance use disorders which could lead to a misuse of opioid medications should be identified.   Because chronic opioid use has limited evidence of safety and long-term benefit, providers are warned that opioid medication should be continued only if “clinically-meaningful improvements are observed.” If the provider suspects a misuse of opioids, they are directed to refer the patient to a to their insurance carrier or local county drug and alcohol program for addiction treatment.

It is hoped that the increased attention to the dangers of opioid use will help change the behavior of those responsible for current epidemic. The guidelines, if followed by providers treating injured workers, could help reduce the long increasing costs to Employers in the form of related medical expenses and lost productivity, and to the injured worker, who due to inappropriate opioid prescribing suffer from continued impairment and addiction. The guidelines outlined here can be viewed in their entirely. 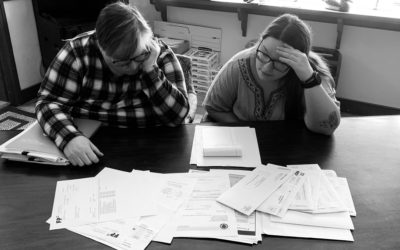 Actionable Steps When Dealing With Debt

According to Ramsey Solutions, just over 55...